At first glance, the 2011 Chevrolet Silverado doesn’t appear to have changed much compared to its 2010 counterpart. But don’t let their familiar faces fool you, because virtually all of the greasy bits have been substantially upgraded or replaced entirely. Like the competitive heavy-duty trucks from Ford and Dodge, Chevy offers its trucks in a huge array of configurations with varying passenger, payload and towing capacities and an array of gasoline and diesel engines. 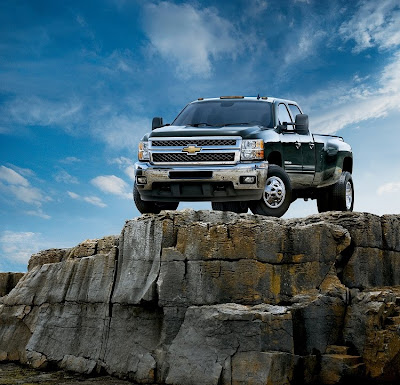 We drove seven different variants over two days in the Allegheny Mountains of Western Maryland along with the latest models from Dodge and Ford for comparison’s sake. While the sales volume in the heavy-duty truck segment is smaller than it was at its peak a few years ago, it comprises about 25 to 30 percent of all pickup sales.

The Silverado and Sierra HD pickups are available in 3/4-ton 2500 models and one-ton 3500 models. As you might guess after a quick perusal of the spec sheet, the 3/4- and one-ton designations are little more than a carryover nomenclature from bygone days when they were limited to those payloads. As all trucks have become more capable, even the light-duty 1500 can carry over 1,500 pounds. Depending on the configuration, 3/4-ton 2500 models now accommodate up to 4,192 pounds and the one-ton 3500 can haul 6,635 pounds. Both of those figures are better than Ford’s corresponding F-250 and F-350 Super Duty models.

While Dodge has applied the styling of the latest light-duty Ram to its new HD trucks and Ford has fitted its F-Series with the boldest looking grille we’ve seen yet, Chevrolet has taken a more conservative approach. The front bumpers on the Chevy Silverado trucks are slightly reshaped, with bigger air intakes below the grille. The HD Silverado pickups are available in regular, extended and crew-cab styles with 6.5- or eight-foot cargo boxes. Both the 2500 and 3500 are available with the single-wheel rear axle while the 3500 can also be outfitted with the dual-wheel rear axle. Most of these combinations are also available with either a 6.0-liter Vortec gasoline V8 (below, left) or the 6.6-liter Duramax diesel V8 (below, right) and rear– or four-wheel drive.

The New Silverado HD trucks now offer Autonet WiFi. Autonet provides a small wireless router with a built-in 3G mobile broadband modem. As soon as the truck is started, the router fires up, connects automatically and provides internet access to anyone within about 50 feet of the vehicle. With Autonet and OnStar’s built-in GPS receiver, commercial truck users can use their existing laptops or netbooks.

Peel away the bodywork and almost everything else is new, starting with the frame that forms the foundation of these beasts. The two main longitudinal rails are still hydro-formed, but they are now fully boxed from bumper to bumper. Only the larger chassis cabs retain a C-channel rear section to facilitate mounting whatever they end up carrying. A stiff frame is critical to durability and improving ride and handling, and in the not so distant past it was common to see the bed and cab of a pickup truck quivering independently over rough pavement. This new chassis and re-worked suspension, however, has greatly reduced that tendency and contributes to improved payload and towing capability. 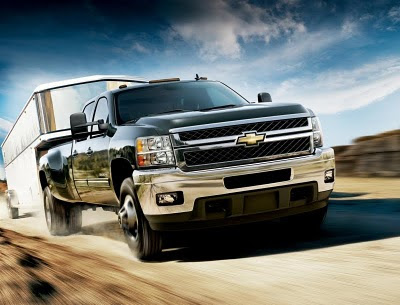 At the front corners, an independent control-arm suspension setup is retained, and it’s a unique setup in this segment. The Silverado HD control arms are now wider than before to foster better control and isolation. At the rear axle, the leaf springs have gone from 2.5 to three inches in width. According to GM engineers, the wider springs reduce the internal stresses, thereby improving durability and load carrying capacity. The leaf-spring-axle configuration is now asymmetrical for the first time, a move that cuts down on axle windup under acceleration and braking, neatly improving handling at the same time.

Hanging off the ends of the suspension members are bigger brakes than have ever been fitted to a GM truck. The rotors have grown from 12.8 to 14 inches in diameter at both axles and the swept area of the pads has increased by 13 percent. The new calipers and their resultant brake feel are much stiffer than before, giving you confident stopping power, especially when the truck is loaded.

For 2011, all single-rear wheel 2500 and 3500 models also receive full electronic stability control with trailer sway control. The system detects if the trailer is starting to oscillate back and forth as it would before washing away completely. If the sensors detect eminent calamity, the system alternately applies the truck’s brakes from side-to-side until everything settles down again.

The 364-horsepower 6.0-liter Vortec V8 and 6L90 six-speed automatic are carryover from 2010, but they remain among the best gasoline truck engines available. However, for those who really need serious hauling capability, the optional 6.6-liter Duramax diesel V8 and Allison 1000 six-speed automatic transmission are the only way to go. Unlike the Blue Oval’s Scorpion V8, the Duramax is not all-new, but it is heavily revised. Like other modern diesels, it now has a high-pressure common-rail injection system with piezoelectric injectors that can execute multiple pulses per ignition cycle. This allows the fuel delivery to be more precisely metered and spread out over a longer time so that combustion temperatures remain under control. Lower combustion temperatures help reduce NOx production so that the Duramax can meet the 2010 emissions standards.

The engine changes alone are not enough to make the Duramax clean. Like the Super Dutys and all of the six-cylinder German diesels in the States, GM has also incorporated a urea injection system to clean up whatever residual NOx is produced. The heated, 5.3-gallon urea tank is mounted on the frame rail adjacent to the oxidation catalyst and needs to be refilled about every 5,000 miles along with oil changes. In addition to running more cleanly, the Duramax also has improved fuel economy by about 11 percent, more power and torque and is much quieter than ever before. Heavy-duty trucks don’t have to carry EPA window stickers, but according to GM’s Spina, the 3500 diesel achieves a combined rating of about 17 miles per gallon.

All recent heavy-duty trucks have had a tow-haul mode that allows the driver to lightly apply the brake pedal for a couple of seconds and trigger automatic transmission downshifts when on a downhill grade. The diesel trucks also add exhaust gas braking that typically uses a bypass valve to increase the exhaust back pressure in the engine, forcing it to slow down. When carrying a heavy load or towing, this can help reduce the workload on the brakes dramatically. For its 2011 trucks, GM has taken this technology a significant step further. The existing exhaust gas braking systems are basically just on-off controllers, but with the new Duramax, the system monitors vehicle speed when you set the cruise control, and in addition to maintaining speed when going uphill, it uses the variable geometry vanes in the turbocharger to adjust the backpressure just enough to hold a constant speed when going downhill. Even without using the cruise control, just tapping the brake pedal for a few seconds will trigger exhaust braking and hold the speed on a grade without using the binders.

All of this is a long way of saying there’s a lot of fancy technology at work underneath what most people think of as just simplistic beasts of burden. As it’s not uncommon for the people who drive these trucks to accumulate 100,000 hard miles each year, it’s particularly important to understand how well the drive.